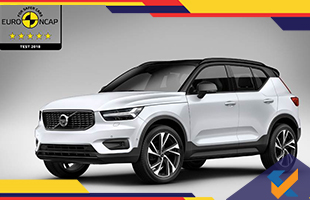 Volvo XC 40 is ranked as one among the top  five cars for its 97 percent Adult Occupation Protection score as tested by Safety Regulatory Organisation for the last three years. This SUV has been very recently launched  in India and has scored well in other aspects also. Like 87 percent in Child Occupant protection, 71 percent in Vulnerable Road users protection and 76 percent in safety Assist systems. This means XC 40 is rated on par with that of other bigger models like 60 and 90 series as regards safest cars on the road.

The NCAP Testing conducted in 2018 is one of the toughest and most challenging ones Considering even the smallest requirement like cyclist-detection with auto brake and emergency lane- keeping systems. Overall, XC 40 has been rated as the best regarding maintenance of highest safety standards among all cars under the new regime.

As per Mr.Malin Echolm, chief of Volvo Cars Safety Centre, new XC 40 is one of the safest cars on the market conforming to the best technology of any small SUVs, enabling drivers to avoid collisions by timely detection, to remain in their stipulated lane and reducing the occurrence of running off the roads. All Volvo cars

which have undergone the test by  Euro NCAP Assessment have received five stars in their respective tests and are on sale. In the year 2017, XC 60 was awarded the best performing large off-roader and best overall performer in the prestigious Euro NCAP 2017 being the best in class safety awards. The XC 90 received the same award in 2015.

XC 40 was named 2018 European car of the year in the month of March 2018, is the first Volvo to win the prestigious award, and, has, since been one of topmost selling cars of Volvo. To meet the growing demand for the car, the company has announced in May 2018 of its plans to expand its manufacturing facilities in Europe and China.

Hyundai To Expand Production Capacity By 2019 With No Additional Investment

Hyundai Motors India Ltd. (HMIL) roars out a price hike of 3% for its popular hatchback Grand i10 in India. This revised price hike can be seen rising in the Hyundai motor industry from August 2018. This announcement held with a press making up the statement on 17 July.

HMIL Roars a Price Hike on Grand i10 in Indian Market

While its existing Assurance TripleMax range is known for offering a balanced mix of ride comfort and low road noise, the company has upgraded the series by introducing the TripleMax 2. Goodyear's new line gets a boosted compound formulation of Carbon-Silicon to aid braking, and downsized rubber blocks on the tyre’s contact surface to further cut down road noise.

Today, Ford India has crossed a major milestone – a little over 20 years after it established its presence in the country, Ford has breached the 1 million unit sales mark. The one millionth car – a Ford Freestyle – was delivered to a customer today in New Delhi.

Stay at the top of the game

Catch up on the latest from auto world, deals and smart tips!

for subscribing to indianbluebook.com, the best resource for the latest on automobiles!

@Indianbluebook#Bugatti will premiere their record-breaking hypercar, Veyron, at the Geneva Motor Show this year. http://t.co/sxtTTii7TW- 12 Feb, 2015

@IndianbluebookThe compact car segment in India will see a new entry this June, with the #FordFigo sedan. http://t.co/TBu2xQ5R2C- 11 Feb, 2015

@Indianbluebook#Jaguar has developed a new technology that protects cyclists from four wheelers. It warns the driver of cyclists! http://t.co/vZUyNS74gU- 09 Feb, 2015

@IndianbluebookThis #British made #car is famous in the racing circuit & #Hollywood. Can you guess the name? Hint: IINM OOPERC http://t.co/fXyt3ixvTk- 06 Feb, 2015

@IndianbluebookIf you had to pick an SUV for you and your family, which one would it be? A) #FordEcoSport B) #RenaultDusterhttp://t.co/iFx7VXFuBG- 04 Feb, 2015